If you want to force a particular curve fit through a specific point, you can do so via the advanced models in CurveExpert Pro (you can actually do it via a one-line equation as well, but the result is a little ugly). Forcing through a point acknowledges that you lose one parameter in your fit; meaning that one parameter must obey a specific relationship given the other np-1 parameters. So, just solve for the one and compute it appropriately in the model.

For example, if you want to force a line

through a given point (

. There is only one free parameter left out of the two, which is

. Implementing this condition in an advanced user model looks like this (some comments removed for brevity):

Doing the same thing with a quadratic, we have

. Thus, we only have two free parameters

. Implementing this condition in an advanced user model looks like this:

We can see the results of the two curve fits below. The optimizer has chosen the best (free) coefficients possible to fit the data, under the constraint that the curve must pass through the point (0.75,1.6). 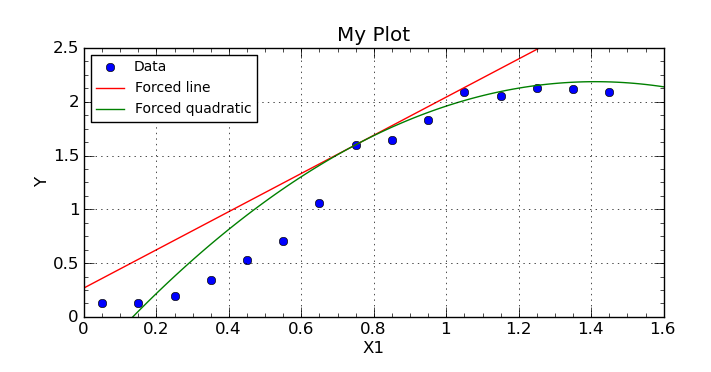